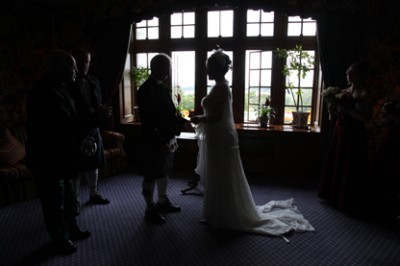 I was delighted to be at wedding recently across in Perthshire at a wonderful hotel and golf course venue. All the staff at the hotel were very well prepared, everything being organised to perfection. Everything, that is, but their choice of the location for the ceremony. This should have been outside in the warm sunshine ? but even the best hotels in the land can?t organise that. It was a bit cold and promised to rain at any time, so, in the age old tradition of just about every venue, the ceremony was set up in front of a wide expanse of window, on this occasion, with a fine view to the Perthshire countryside.
What was not considered is the fact that the couple were completely silhouetted against the bright light and that none of their guests could see their faces. As the photographer, I try very hard not to disrupt the ceremony using flash for every photograph. This made it impossible to get good shots, and reluctantly, I had to use flash ? despite having assured the minister that I would try not to. The room was quite long and the 50 or so guests were crowded into the length of the room, peering above other guests trying to witness the silhouetted ceremony.
With a little forethought on the part of the hotel, the positioning of the ceremony could have been away from the back lighting at the window and located in front of the magnificent, flower bedecked fireplace. In this position the couple would have been lit by the side lighting from the window, the guests would be able to see them far more clearly (not to mention the poor photographer!) and more of the guests would have had a clear view.
You?ll see what I mean in these two shots - one against the light (no flash, which is how the guests saw the wedding, and the other of signing the marriage schedule, which was taken at right angles to the window. 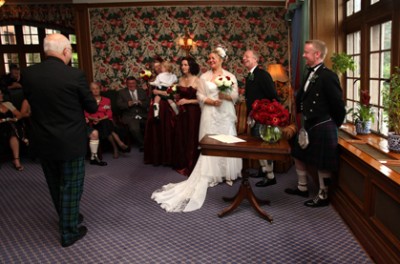 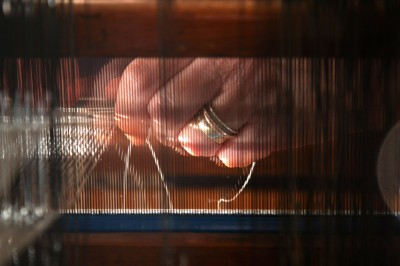 I'm in the midst of preparation for a major local event, to take place at the end of the month,25th - 28th Sept., in which 40 or more artists from the Cowal Peninsular will open their studios to visitors.There will also be Traditional music concert in the Strachur Memorial Hall (Sat. 26th September)

I have been involved with the event every year since it started and have taken the majority of the photographs featured in the directory. Some of these are shown here. This being a feature shot of "Hands working" - actually, these are the hands of Sarah Sumsion - a wonderful weaver. A piece of her work is shown below. 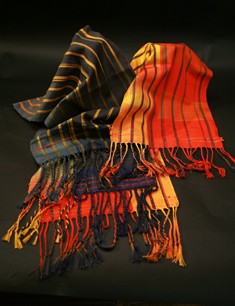 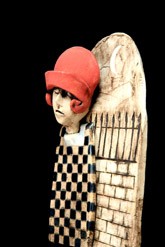