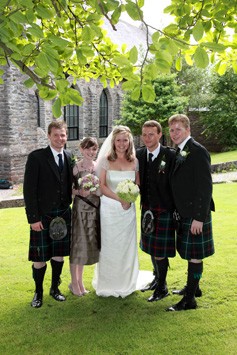 Yet again, I?ve been very lax in keeping my diary pages up to date.

Since the June entries there have been numerous weddings and photos from one of these is included here.
Perhaps the most daunting was been asked by a friend of mine, Ronnie Cairns, who is a very fine wedding photographer, to cover his daughters? wedding. Obviously, his daughter didn?t want her father concentrating on photography throughout her special day, so Ronnie commissioned me for the job.
What a wonderful laxative it is to cover the wedding of another photographer?s daughter, especially as he?d said there was no need to spend the usual day or so which is normally needed to work on the photos after a wedding. He?d see to that himself. Downloading all the photos to his drive on the day meant that more than an element of confidence was needed to make sure that I?d made a good job of it.

A few days later we were to go on holiday for two weeks, and so it was with great relief that Ronnie phoned just as we were about to leave to say how pleased everyone was with the photography at the wedding. Not half as pleased as I was to hear him say so! 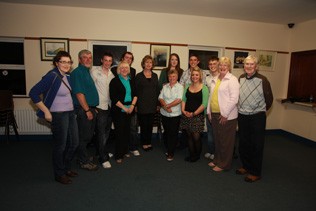 In early July I travelled with a group of musicians to Ireland and some islands off the West Coast of Scotland.. In earlier Diary entries this year I made reference to the project involving the musicians and a Ceilidh Trail following on the footsteps of Columba.

Three musicians from Ireland and four from Scotland were put together for five days in order to get to know each others material and to arrange a programme for the tour.
We travelled to Ireland visiting three venues, in County Derry and Donegal, and the gigs were extremely well supported. At one, in Gleann Columb Cille, we were pleased to find the Irish President, Mary McAleese, was attending, and the photo here shows her with the musicians and with Christine MacIntyre and Elizabeth Bain of the Feis movement, who organised the tour. 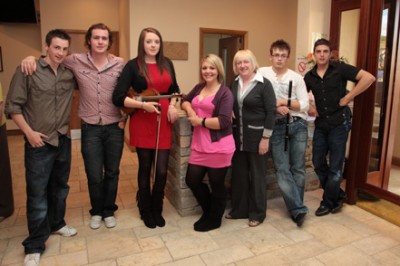 Here's a few more images from the Ceilidh Trail.
Right - showing the band at Downings in Donegal.
Below - a shot from the live slide presentation I put on throughout the concerts. 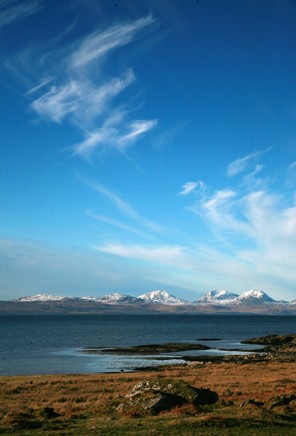 This is one of over 200 images put together into a slide presentation using dissolving images.

This was produced digitally, but took me back to the days when I produced many slide sequences using transparencies and projected them using the wonderful "Royale" projector made by Colin Balls - one of the Masters of Audio Visual work.